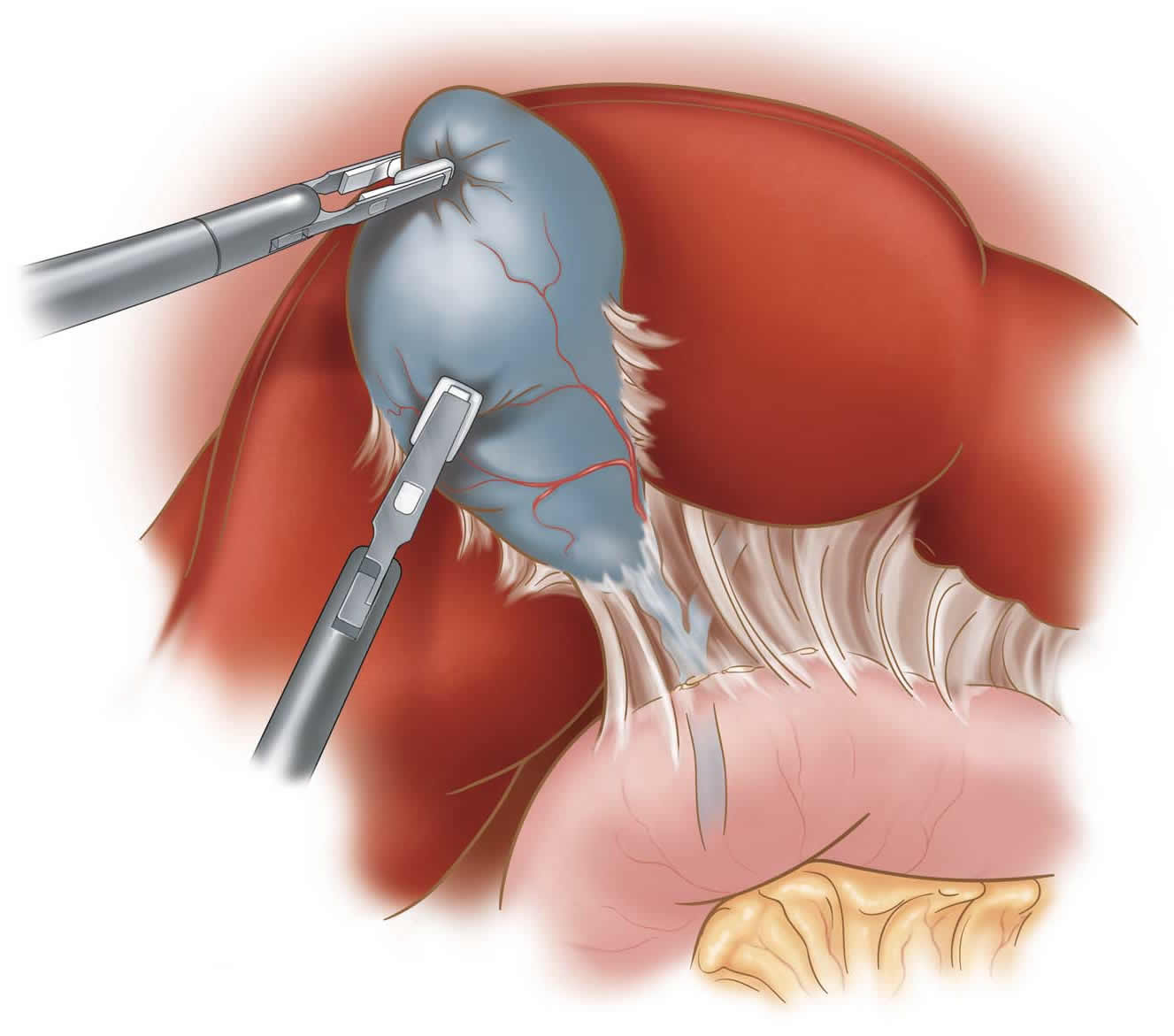 Most patients with cholelithiasis have no significant physical symptoms. Approximately 80% of gallstones do not cause significant discomfort. Patients who develop biliary colic generally do have some symptoms. When gallstones obstruct the cystic duct, intermittent, extreme, cramping pain typically develops in the right upper quadrant of the abdomen. This pain generally occurs at night and can last from a few minutes to several hours. An acute attack of cholecystitis is often associated with the consumption of a large, high-fat meal.

The medical management of gallstones depends to a great degree on the presentation of the patient. Patients with no symptoms generally do not require any medical treatment. The best treatment for patients with symptoms is usually surgery. Laparoscopic cholecystectomy is typically preferred over the open surgical approach because of the decreased recovery period. Patients who are not good candidates for either type of surgery can obtain some symptom relief with drugs, especially oral bile salts.

Cholecystitis is an inflammation of the gallbladder, both acute and chronic, that results after the development of gallstones in some individuals. The most common symptoms and physical findings associated with cholecystitis include:

In a laparoscopic cholecystectomy, four small incisions are made in the abdomen (A). The abdomen is filled with carbon dioxide, and the surgeon views internal structures with a video monitor (B). The gallbladder is located and cut with laparoscopic scissors (C). It is then removed through an incision (D).
Fever
Jaundice
History of pain after eating large, high-fat meals

The initial diagnosis of acute cholecystitis is based on the following symptoms:

Postoperative care for the patient who has had an open cholecystectomy, as with those who have had any major surgery, involves monitoring of blood pressure, pulse, respiration, and temperature. Breathing tends to be shallow because of the effect of anesthesia, and the patient’s reluctance to breathe deeply due to the pain caused by the proximity of the incision to the muscles used for respiration. The patient is shown how to support the operative site when breathing deeply and coughing and is given pain medication as necessary. Fluid intake and output is measured, and the operative site is observed for color and amount of wound drainage. Fluids are given intravenously for 24–48 hours, until the patient’s diet is gradually advanced as bowel activity resumes. The patient is generally encouraged to walk eight hours after surgery and discharged from the hospital within three to five days, with return to work approximately four to six weeks after the procedure.

Care received immediately after laparoscopic cholecystectomy is similar to that of any patient undergoing surgery with general anesthesia. A unique postoperative pain may be experienced in the right shoulder related to pressure from carbon dioxide used in the laparoscopic tubes. This pain may be relieved by lying down on the left side with right knee and thigh drawn up to the chest. Walking will also help increase the body’s reabsorption of the gas. The patient is usually discharged the day after surgery and allowed to shower on the second postoperative day. The patient is advised to gradually resume normal activities over a three-day period, while avoiding heavy lifting for about 10 days. Want to know the gall bladder stone surgery cost in hyderabad? Then fill the free consultation form on our website and our executives will get back to you for further interaction.

Potential problems associated with open cholecystectomy include respiratory problems related to location of the incision, wound infection, or abscess formation. Possible complications of laparoscopic cholecystectomy include accidental puncture of the bowel or bladder and uncontrolled bleeding. Incomplete reabsorption of the carbon dioxide gas could irritate the muscles used in respiration and cause respiratory distress. While most patients with acute cholecystitis respond well to the laparoscopic technique, about 5–20% of these patients require a conversion to the open technique because of complications.

Most people won’t experience digestive problems after a cholecystectomy. Your gallbladder isn’t essential to healthy digestion. Some people may experience occasional loose stool after the procedure, which generally resolves over time. Discuss with your doctor any changes in your bowel habits or new symptoms following your procedure.

No Tag have Found!